See the new house page for maps and plans of the new house.  This page is a log of the actual construction. Note that the pictures are mostly be arranged
three-per-line. On most monitors this will display without splitting if you make the browser fullscreen.

March 9, 2005. This place had only four stakes and a porta-potty last Friday.  We were really getting worried, but it looks like they are getting going now.

April 2, 2005  - Some of the tendons are tensioned and framing continues.  There's lots of nonsense about post-tensioning on the Web, but if you find the knowledgeable references you discover the point
is that concrete is much stronger in compression than tension.  So the idea is to use the cables to draw the concrete into tension so that it is stronger.  The cables are then grouted into place.
You really want to be careful drilling through a tensioned slab because if you nick one of these cables it can explode, which is not good at all.  You have to be careful to design the tensioning with the particular
structure and soil conditions in mind.  It turns out that the design for this house is based on a soil analysis done within a few hundred yards of the site -- not sure exactly where, but that's roughly the spacing
of the soil analyses.  The tension cables are supplemented by rebar in critical places.  You can see this in the last two pictures from March 9.  An alternative, the older way of doing things, is to use rebar
throughout. One difference with this approach is that the rebar is extremely strong in tension but the concrete has to start to crack before the rebar starts to take the load, which might be a disadvantage. 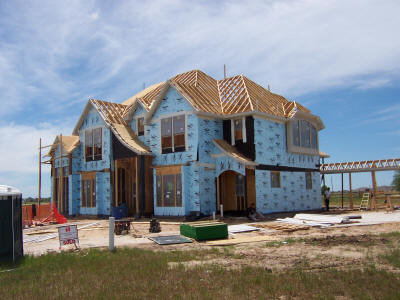 This is the gas stub for the barbecue.

The last picture is the back door.  This and the door on the garage are what we will end up with, but the front door is a temporary construction door that will be replaced later.

April 29, 2005 - Inspected and ready for insulation, then dry-walling.  A lot of stuff has been fixed, including items called by the inspector we brought in. I took a bazillion pictures at this point --
this is a random sampling.

May 6, 2005 - The breezeway walk is staked out -- this is not exactly the way it is shown in the plat.  Insulation was put into the walls -- R12 (plus bricks, later) for vertical walls, R20 for slanting
and R30 for horizontal, plus there will be insulation blown into the attic floor. Then dry wall.

May 14, 2005 - The bricklaying starts.  Inside the drywall has been "floated" and textured.

May 20, 2005  - About half the brick is in, the breezeway walk is concrete and a bunch of stuff is happening inside.  Painting, cabinets, etc.  The garage and breezeway are not positioned exactly as shown on plat.

May 27, 2005  - Oops, they put in the wrong color wood cabinets.  After some phone calls the correct cabinets are on rush order.

June 3, 2005 - Another oops.  They bricked over the gas stub for the barbecue.  See previous pictures from inside and outside.  I shudder
to think what they are going to have to do to fix that, but I guess it's not my problem.

June 15, 2005 - The gas stub and cabinets are fixed.  The latter was a pretty big deal. The hobby table was also a problem -- it originally extended all the way to the wall, not leaving room for a fridge.